A handful of soil contains billions of microbes (bacteria, archaea, fungi). The majority of them have never been successfully cultured or studied in a laboratory. How do we gain access to the value encoded by these organisms if they can’t be easily cultured? There is undoubtedly tremendous value encoded by archaea, bacteria, fungi, and uncultivated micro-organisms–the challenge is gaining efficient access to them. Following the ‘golden age’ of natural product (NP)- drug discovery in the mid-20th century, very few new categories of NPs have been discovered since that period. Most of the big pharmaceutical companies are pulling out of research and development (R&D) due to a lack of profitability. We are at risk of running out the novel NP reservoir dry. Intact Genomics has successfully developed a metagenomic unbiased shuttle BAC library platform by combining its unique large DNA technologies and next-gen sequencing  to rapidly capture millions of full-length secondary metabolite gene pathways (averaging 100kb or larger) for large scale heterologous expression of natural product compounds, which contributes to science, and has potential to revive the discovery of drugs, antimicrobial agents, anticancer drug candidates, insecticides, etc. for pharmaceutical and agricultural companies and other industries as well as the potential to save lives. 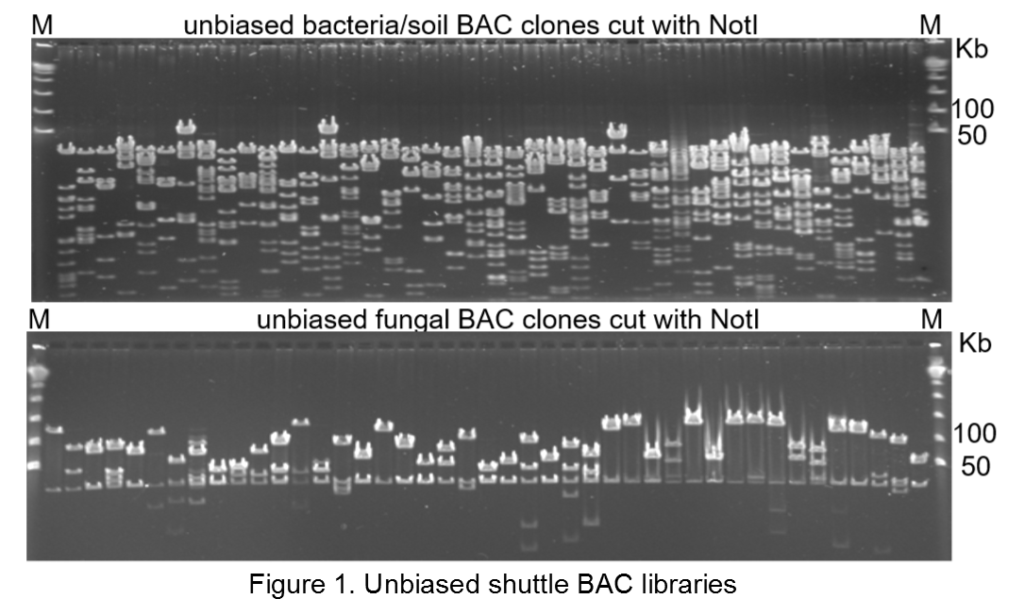 Figure 1 Genomic DNA was isolated from bacteria, fungi or environmental samples, randomly sheared, size-selected to >100 kb, and cloned into either shuttle vector: pIG-BAC4 or pIG-BAC5. DNA from minipreps was digested with NotI to excise inserts. The vector band is visible at about 15kb, and average insert size of this Random Shear shuttle BAC library of soil metagenomes was estimated at 120kb (top panel) and 125kb (bottom panel).

Due to the advancement of next-gen sequencing (NGS) technology, the enormous numbers of reads generated by NGS enabled the sequencing of entire genomes of any species: human individuals, animals, plants, and microorganisms at an unprecedented speed (Van Dijk et al. Trends in Genetics 2014). However, very little of the daunting amount of next-gen sequence data has been translated into functional studies. On the other hand, synthetic biology is at its infancy and complete synthesis of a large DNA with 100 kb is too expensive for routine functional studies. Novel large DNA technology, such as unbiased bacterial artificial chromosomes (unbiased BACs), could bridge this gap to translate sequence information into genome biology and functional genomics, as well as metagenomics. Since traditional BAC libraries, which are built by using restriction partial digestion, are inherently biased, they will inevitably cause missing information and genomic gaps in sequences. Unbiased BAC technology is crucial to bridge these gaps, completely cover target genomic regions of interest, obtain the highest quality of genome sequencing assembly, finish genomes, and for functional applications. We have successfully developed and continuously optimize the novel technologies for unbiased large DNA isolation, purification, manipulation, and Random Shear BAC cloning. Intact Genomics is the worldwide sole provider of high-quality, unbiased Random Shear BAC libraries. We have also demonstrated broad applications of unbiased BAC libraries in genome studies and discoveries in animals, plants, human, as well as bacteria, fungi, metagenomes, and other species.
A single and unbiased Random Shear BAC library provides the optimal resource for efficient genomic studies and discovery applications. We have provided hundreds of unbiased Random Shear BAC library related projects (Tree of Life) worldwide since 2008. 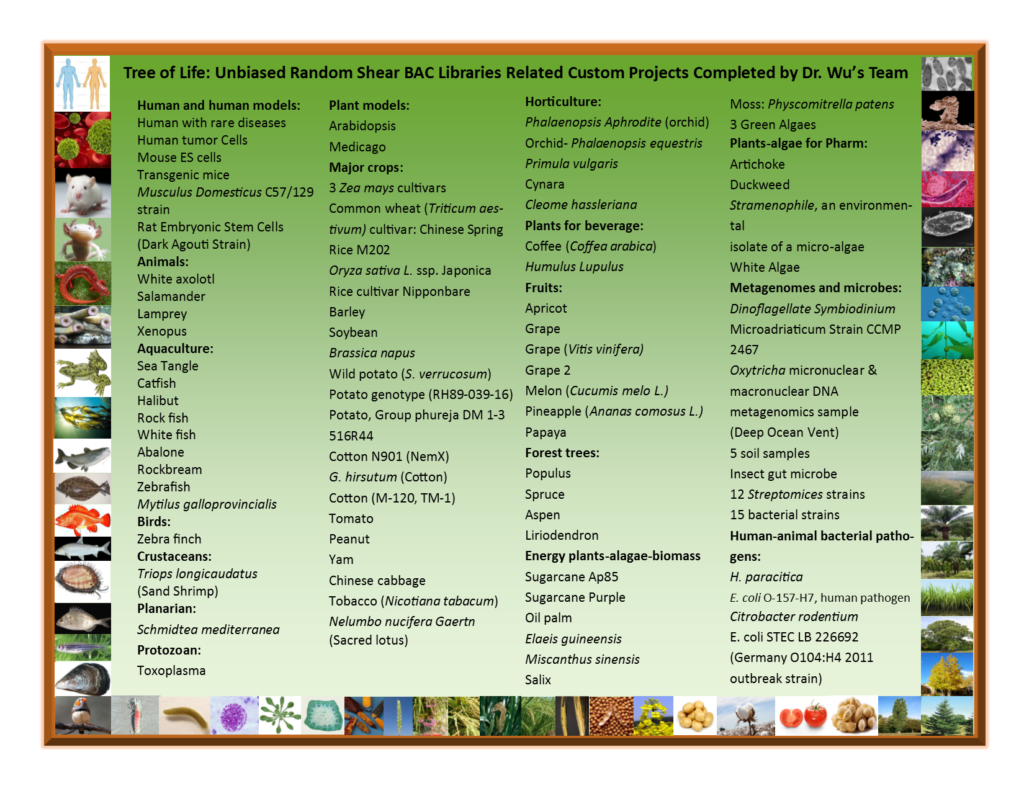 Intact Genomics is the sole worldwide provider of high-quality, unbiased BAC/FAC libraries. We have constructed random shear shuttle BAC or FAC libraries from bacteria, fungi and metagenomic samples with average insert size at least 100 kb, large enough to contain entire sets of full-length PKS/NRPS pathways. This technology enables natural product discovery on a scale which was impossible before.

* The technologies developed were partially supported by the NIH SBIR programs. We also appreciate many collaborators worldwide from our custom genomic service projects